In this blogpost Olav E. Gundersen, PhD student at UrbNet, Aarhus University, reflects on the use of coins in medieval Europe and the differences between rural and urban areas.

One of the strange consequences of the proliferation of metal detectors in Denmark – and the liberal policy regarding the use of detectors – is how coin finds in the countryside seem well on its way to overshadow the number of medieval coins found in towns. In itself, it is a welcome development, as the use of coins in the countryside in the Middle Ages is still rather poorly understood. However, there is a risk that as coins from metal detectorists, who are primarily working outside the limits of the medieval towns, keep flowing into the museums, we might lose sight of an important difference between the economic life in villages and in towns, namely the higher velocity of trade. 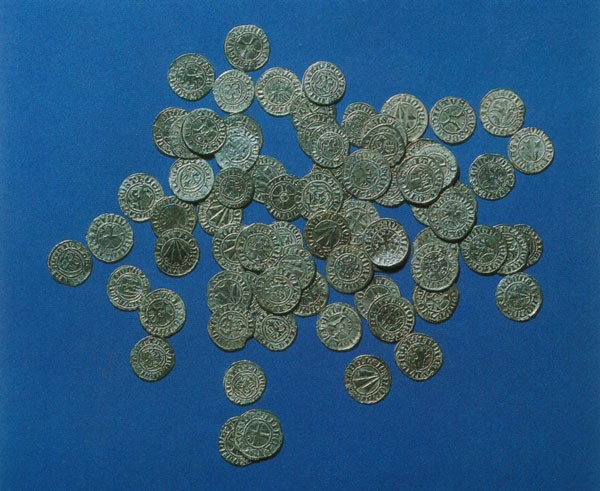 Example of some Late Medieval coins from a coin hoard from Viborg, probably deposited around 1390. (http://viborghistorie.dk/udstilling/udstilling-5/udstillingsobjekt-5-2-73.tkl?position=2)

Coins were necessary for the many small daily or weekly purchases that characterised urban life, or at the very least made them much easier. If you wanted to purchase bread, half a cheese, or ale, it was highly impractical to carry around other goods that you could give in return – and to find someone who wanted exactly the goods you carried with you. In economics, money is seen to eliminate this problem of the “double coincidence of wants”, a problem that arises when the buyer has to find someone who coincidentally sells exactly what the buyer wants and who needs exactly what the buyer has brought with him to trade. In villages, this is less of a problem as the economic life there is to a larger extent connected to fewer and larger payments, such as rent and equipment for the farm. In urban contexts, with a wider range of commodities on sale, this problem would occur often and would present a great challenge to the people living there if they did not have a standard currency to fall back on.

The importance of coins in urban life

One example of how vital coins were to commercial life comes from England in the middle of the fifteenth century when small change was in short supply as a consequence of a dwindling silver supply.  In a letter from 1469 the servant of one Sir William Plumpton wrote that he had tried to sell some sheep at the market of Melton Mowbray in Leicestershire but as he could only get the very low price of 13d a piece for even the best ones, he decided not to sell any. Since there was little coin to go around, prices plummeted to unacceptable levels and commerce grinded to a halt. The urban commercial life seems to have been hit particularly hard by this lack of coins and the solution many fell back on was to mint coins with ever-smaller amounts of silver.

Another example of the consequences of the lack of silver can be found in 1447, when the town authorities of Maastricht petitioned their duke, Philip the Good of Burgundy, to be allowed to strike so-called “black money”, which is to say money with almost no silver. Such requests became common as the silver supply diminished, and sixteen years later the same duke specifically wrote that he authorised the chapter at Maubeuge to strike coins so that townsmen could use them in “oeuvres de petite despense”, which is to say in small purchases and Works. 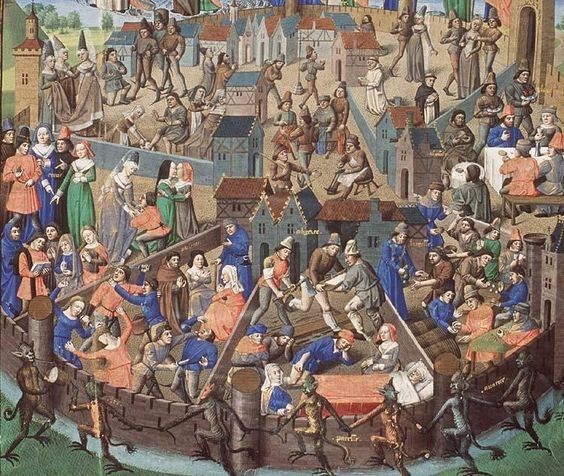 An interesting detail can be found in the bottom right corner of this illustration from the second prologue of Augustine’s The Heavenly City and the Earthly City, where one can see townsmen paying for their drinks with coins. (Koninklijke Bibliotheek – Nationale bibliotheek van Nederland, The Hauge, MMW, 10A 11 fol. 6r http://manuscripts.kb.nl/zoom/BYVANCKB:mimi_mmw_10a11:006r_min_2)

An example illustrating how common and vital coins were in town life can even be found in the much less urbanised medieval Norway in the 1276 Town Law of the Norwegian king Magnus Lagabøte (r. 1263–1280). In Section VII, Chapter 9, it says that “if somebody buys from someone else, and don’t have silver on him, and he goes home to get the money and wants to pay, and the seller has sold it when he comes back” the potential buyer shall accuse him of robbery and the seller either has to give him the item or pay a fine. Norway was situated on the periphery of medieval Europe and was generally less accustomed to the use of money than most other parts of contemporary Europe, but in Norwegian towns, it seems it was expected that money would be frequently used for small purchases.

What do the rural coin finds tell us?

The coins found in the countryside indicate that as those areas became more involved in market exchange, coins started to be used in economic transactions in rural areas as well. However, the high number of coins found outside urban sites compared to inside is more a reflection of where metal detectorists have looked than a reflection of medieval coin use, as it is much more difficult to use metal detectors inside towns than outside. The comparison between a fast urban pulse and a slow rural one is an image that pops up so often that it has almost become a parody, but when it comes to economic transactions it has a couple of things going for it – not least in the Middle Ages.

The use of money in the countryside represents an important economic change – a change that I am trying to investigate in some detail in my PhD project on the relationship between urbanisation and commercialisation in medieval Scandinavia. As metal detectors lead us to uncover in ever greater detail the use of coins in the Danish countryside we should not forget that it was the towns that had the highest velocity of exchange, and consequently were most reliant on, and familiar with, the use of coins.